"The Winning Ticket" by Bill Pronzini 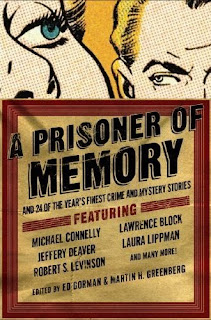 Nameless and Jake Runyon are on stakeout in an all-night diner waiting on a deadbeat dad who has a history of spousal abuse. Nameless isn’t keen on the job because it feels more like a strong-arm bounty than detective work. The weather outside is wet and the pair are about to call it a night when a couple bang through the entrance. The man is about forty and hard-looking with tattoos on his neck and the back of his hand. The woman is thirty and nervous.

The detectives both sense something wrong with the couple and when they notice a gun tucked into the man’s pants they decide to follow them out into the night. To tell more would ruin the story.

I’ve read “The Winning Ticket” twice over the last year—once in the pages of Ellery Queen Mystery Magazine and then again in the anthology Prisoner of Memory—and its images struck hard and fast with each reading. It is delivered in Bill Pronzini’s stark and modern hardboiled style and it unravels exactly as expected. There are no jarring surprises or twists, but it is styled, plotted, and executed perfectly.

The setting is detailed with a rich and vibrant nuance that transports the reader to a rainy Northern California winter night. The characters are nicely fitted into the story with a detail that endows each with a sense of reality. The atmosphere is heavy with impending violence and Mr. Pronzini doles out the clues and hints like the professional he is.

“The Winning Ticket” is a nearly flawless short story. The plot relies on an element of coincidence, but it is explained through the action and by the narrator. It is unique and original while also being steady and familiar. Bill Pronzini is deserving of the title of Grandmaster, and this story is another notch on his belt. It is a winner and very much worthy seeking out.

“The Winning Ticket” originally appeared in the June 2007 issue of Ellery Queen Mystery Magazine, and was republished in the anthology Prisoner of Memory: And 24 of the Year’s Finest Crime and Mystery Stories edited by Ed Gorman and Martin H. Greenberg.
Posted by Ben Boulden at 11:29 AM