KISS HER GOODBYE by Allan Guthrie 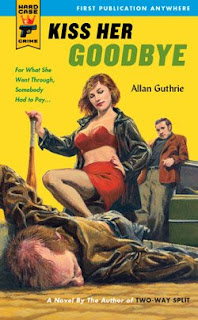 A couple of years ago I wrote a few reviews and a short story for an online magazine called Adventure Fiction Magazine. It was a magazine devoted to adventure fiction, specifically Robert E. Howard-type fantasy. It was short lived, but I had a good time writing for it. One of the reviews I wrote was for Allan Guthrie's terrific hardboiled Kiss Her Goodbye. A novel that really opened my eyes to the new movement in modern crime fiction. I'm a little slow sometimes.

The movement recaptured the essentials of the old hardboiled noir that permeated the paperback market of the late-1940s, 50s, and 60s, which was an evolution of the pulp magazines of the 1920s and 30s; a subject for which I'm far from expert. The movement has caught the attention of critics and readers alike, and its strong and uncompromising style kills me. I absolutely love it. So here is my review of Kiss Her Goodbye. It is one of the first reviews I wrote (which is the nice way of saying it's not one of my best), but it still sums up my feelings about Guthrie's entertaining novel.
Noir is back. The new line of crime novels published by Hard Case Crime, a partnership between Charles Ardai, Max Phillips and Dorchester Publishing, has brought the 1950s style paperback original, complete with alluring, colorful cover art and stark, dark stories of the noir era back into the mainstream. Hard Case has published eight novels to date, four original, and four classic noir reprints.

The latest original novel, Kiss Her Goodbye, arrived in bookstores in early March. It is written by Scottish writer Allan Guthrie. It is Guthrie’s second published novel—the first was Two-Way Split—and you will not be disappointed. If you like your action swift, your violence fast, your women tough and your men hard, you will love Kiss Her Goodbye. It is pure noir. The description is short and blunt. The dialogue is crisp and the characters are, to put it simply, anything but heroic.

This gritty thriller is the story of Joe Hope. He is a collector for an Edinburgh loan shark named Cooper–Cooper also made a brief appearance in Guthrie’s debut novel. Hope is a rudderless man who lives for nothing more than the thrill of collecting and a night spent at the pub, but all that changes in a flash when his daughter kills herself and his wife is murdered. It’s an understatement to say Joe is angry, but he also finds himself as the prime suspect for the murder of his wife. He goes on the run to solve the puzzle; he has to figure out who he can trust, why his wife was killed, who set him up, and then how to get payback.

The prose is written with a rapid fire pace that keeps the story cruising along. It is quick, concise and brutal:

“Bile rose in his throat. He stood up and spewed all over the carpet. He doubled up. Folded to his knees. Puked once more. His guts hurt. His damaged ribs were throbbing again.”

The sentences are short. The storyline is well constructed and executed with the precision of a craftsman. This is the new noir: tough, hard and fast as a bullet. The pace is unrelenting and the plotting strong.

Kiss Her Goodbye is not for the squeamish. The language is coarse. The story is violent. The characters are difficult to like, but it is a masterpiece of noir. It is dark, dreary and real. This one is better than Guthrie’s first, and I’m betting his next will be better still.
Posted by Ben Boulden at 12:08 PM