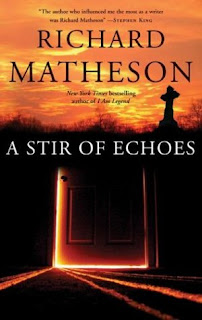 A few years ago I read an interview with Richard Matheson where he categorically denied being a horror writer. At the time I thought it was simply a case of him being uppity because he is absolutely known as a writer of horror fiction. I also wasn’t well-read on Matheson’s work. I had experienced only a few of his novels and a handful of his short stories and I had certainly never seriously analyzed it beyond the point of: That was cool.

Over the past few months I have more intimately acquainted myself with his work. I have read several dozen of his short stories and two of his novels—The Incredible Shrinking Man and A Stir of Echoes—and I have to agree with Mr Matheson. He is not simply a writer of horror. His work certainly contains elements of horror and terror, but it is also something much more. It is a study of the human condition. It illuminates humanity and, his early work especially, opens a vivid and stunning window on Cold War American suburbia.

A great example of Matheson’s view on Cold War America is his novel A Stir of Echoes. The plot is definitely speculative—Tom Wallace, after he is hypnotized in a parlor game at a neighborhood party, is endowed with a perception that allows him to read the thoughts of others and vividly see into the near future. This new ability is seemingly attached to a woman who visits Tom’s house in the quiet hours of the night. She is dressed in a black dress and Tom has no other explanation than she is a ghost and she desperately wants something from Tom.

While the ghost element is what pulls the story, it is the human element that creates the power and longevity of the work. It is set in suburban Southern California in the 1950s and Mr Matheson, with a seeming simplicity, paints a vivid and complex portrait of the American dream. The neighbors are genuine: they are living, breathing individuals who, on the outside, love, dream, and live. It is this surface that Tom is able to see and understand in the beginning, but as the story develops along with his psychic abilities the neighbors are revealed in a much deeper sense—he can see their lust, hate, depression, fear, anger and all the broiling complexity that is humanity.

A Stir of Echoes is written in Richard Matheson’s effective and understated prose style. The dialogue is strong and it has the sound and texture of reality. It is technically a ghost story, but it is much more. There is a well-developed mystery with a subtle flow of paranoia and fear; a paranoia that is very closely related to the Cold War-era itself. It is multi-layered and can be read as both an immensely entertaining novel as well as a work of illuminative literature. It is dark, but it also develops a strain of hope as it reaches its climax. It is a literary work that has already survived past its own generation, and it well very likely remain relevant and read well beyond the current generation of readers. As it, and much of Richard Matheson’s work, should.

A Stir of Echoes was originally published in 1958 and it has a stylistic and thematic relationship with Matheson’s short story “The Distributor,” which was also published that same year. The stories are different in the way each is told, but the subtleties of meaning and the relationship of the individual to society are similar. Each story casts humanity in a dark light, but each also develops a sense of hope and triumph—“The Distributor” in a much murkier and less clear manner. If you want the full impact of A Stir of Echoes find and read “The Distributor” first and then analyze and compare the two as opposite sides of the same coin.
Posted by Ben Boulden at 12:03 PM

Interesting thought about the kinship with "The Distributor."

I'd suggest he certainly was a horror writer, but often a brilliant one...nothing about horror precludes having such insight. (Not solely a horror writer, either, of course, given the range of his work..."The Distributor" a brilliant suspense story. Then there are the westerns, the romantic fantasies, THE BEARDLESS WARRIORS....)

And, as Damon Knight and to a lesser extent Spider Robinson have noted, he could be a bit careless with his prose at times...as could Bradbury. There is worse company to keep.