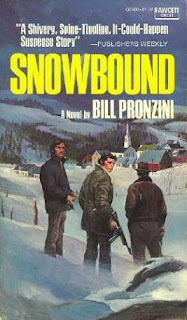 Hidden Valley is a beautiful mountain town that in summer is awash with tourists, but in winter is home to only 74 residents. The Christmas season is in full swing, which at Hidden Valley means the tourists are gone, the streets are empty, and the snow is piling up. There is only one highway that connects the village with the outside world and it runs through a treacherous pass.

The residents are hunkered down and enjoying the quiet, solitary winter. The village is aglow with the season:

“Mantled with a smooth sheen of snow, decorated with tinsel and giant plastic candy canes and strings of colored lights, the tiny mountain village looked both idyllic and vaguely fraudulent, like a movie set carefully erected for a remake of White Christmas.”

The country store, the restaurant and the other small businesses along Sierra Street are quiet as the town waits for an impending storm. What they don’t know is that three strangers are coming with the bad weather and one of them plans to violently take the town hostage. And when an avalanche blocks the pass he effectively, violently and insanely puts his plan in motion.

Snowbound is an early Bill Pronzini novel. It was originally published in 1974 and it has all the earmarks of a 1970s thriller—the prose is sharp with a medium-boiled style, the plot is quick without any tricky gimmicks, the characters are developed with just enough backstory to make them interesting, and the length is perfect: 313 pages in mass market. It doesn’t hurt that you can feel the heavy brown polyester pants clinging to the characters like a talisman against the future. Perfect, really.

The protagonists—a small group of townies—are well painted and one, a stranger to the town, is downright sympathetic and likable. But the power of the story rests with the development and believability of the villain. He is an unlikable man with a feverish insanity that Mr Pronzini develops and enhances as the novel progresses. He, and the other two outlaws are perfect for the story, and they help elevate Snowbound from the pedestrian to the pretty damn good.

The suspense is expertly increased with a measured pace from the idyllic and peaceful opening scenes of life in Hidden Valley to a botched robbery in Sacramento to the violent climax. The early scenes in the village are developed much like a small town horror story; a slow build-up to a known—by the reader—and unavoidable collision with a sinister, almost evil, force.

Snowbound is a novel that would translate very well into a hardboiled film, either as an updated version or in its historical context. Its force and impact have diminished little over the thrity-four years since its original publication. It is not on the par of Pronzini’s recent work—specifically the character development and the unique sense of place—but it is a well-written and entertaining novel that will appeal to anyone who enjoys their thrillers crisp, tight and to the point.

Snowbound was recently—last December—reissued by the terrific small press Stark House Press. It was issued in trade paperback with another early Pronzini novel Games. A novel that I haven’t read, but is on my list.

There is something special about these 70s thrillers and Fawcett had the knack of finding the best of this genre from quality authors. Another good example of this was the four adventures of intrigue that Marvin Albert wrote under the pseud. Ian MacAlister.

Besides the top-notch stories, Fawcett was able to throw exciting cover art on the paperbacks. (Which is why I spent too much money on paperbacks in those days.)
"Snowbound" contains everything that was wonderful about these 70s novels and I'm glad there is a blog like yours out there reminding viewers of past literary gems.

August: Thanks for the kind words. I absolutely agree with you on both the 70s Fawcett line and the Ian MacAlister novels. A rush from the fist page to the last.

I recently--within the last few years--read a 1970s Fawcett titled HUNTER'S BLOOD by Jere Cunningham. It was a DELIVERNCE like novel that I had a lot of fun with. And the cover art was great.

I usually can't pass-up the old Fawcett books when I stumble across them. And I find them all too often in exchanges and used stores.