2017 was a pretty decent year for my fiction writing. I had two short novels published, Blaze! Red Rock Rampage (February) and Blaze! Spanish Gold (October)—both in the Blaze! Adult Western series published by Rough Edges Press—a longish Western short story, “Merrick” (September), and as a capstone my noir short story—and it really is noir and probably a little disturbing—“A Calculated Risk” made its debut in the December issue of Down & Out: The Magazine, Vol. 1, Iss. 2. 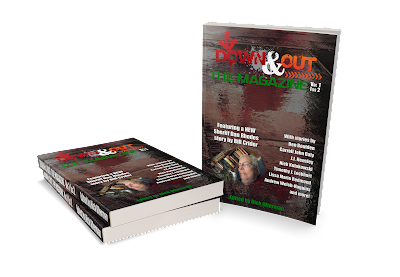 Down & Out: The Magazine is available everywhere in both ebook and print editions. This issue includes eight stories from stand up writers like Bill Crider, Carroll John Daly, Andrew Welsh-Huggins and, if you’re doing the math, five other terrific writers. I’m proud to be included in the magazine and I’m a little proud of “A Calculated Risk” since I think it turned out disturbingly well.


And to whet your appetite, here are the first couple paragraphs from my story:
Six years, two months, thirteen days.
Nothing more than a measurement of time’s passage. The spread so large it would be impossible to connect the perpetrator with the crime. Only a fool or madman would hold a grudge so long. A grudge most never knew existed and those who did know, would have forgotten years ago. It wasn’t much of a thing anyway.
An everyday betrayal.

Email ThisBlogThis!Share to TwitterShare to FacebookShare to Pinterest
Labels: Down & Out: The Magazine

This is great, Ben. I'm glad you'd a good writing and publishing year. All the best for 2018!