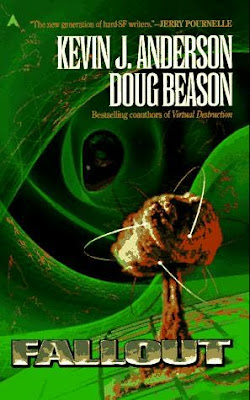 Fallout (1997) is Kevin J. Anderson’s and Doug Beason’s second science fiction thriller, mixing the science of the 1990s and mystery, starring FBI Special Agent Craig Kreident. Kreident, headquartered in San Francisco, specializes in investigations dealing with science. In this, his second outing after Virtual Destruction (1996), he is investigating a threat against the Hoover Dam made by a militia group before being ordered to take the lead on a hot button international incident.
The death of a Russian Nuclear Inspector crushed to death in the Device Assembly Facility, where they are disassembling nuclear weapons as part of a treaty with Russia, in the Nevada Nuclear Test Site. A death that initially appears to be an unfortunate industrial accident, but is an obvious cover-up for a sloppy murder.
Fallout’s plot is standard, but wonderfully 1990s with US-Russian nuclear treaties, militias, aliens, and Area 51. It reads like an X-Files story—a Russian subplot thrown in for kicks—with a unique setting in the Nevada Nuclear Test Site and Groom Lake. The pacing is suspect, mostly solid with a few glitches, the character development zilch (or close to it), and the mystery is less than dazzling. But put your blinders on and think about Mulder and Scully, Art Bell’s Coast to Coast AM, maybe some Electronica, and Natalie Merchant, and you’ll enjoy the ride.
If you want to read Anderson’s and Beason’s better collaborations, check out Assembler’s of Infinity, Ill Wind, Ignition, and Lifeline.

Sounds fun, Ben. I shall check it out.