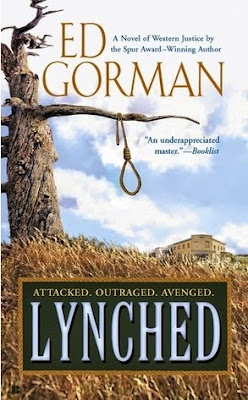 Ed Gorman wrote no fewer than 10 western novels for Berkley between 1999 and 2006. The earlier titles tended to be branded with a single word—Lawless, Vendetta, Relentless, Lynched—and like all of Mr. Gorman’s westerns, each is as much a mystery as a western. I recently read his novel Lynched, originally published by Berkley in 2003, and annoyingly out-of-print..
Ben Tully is a quiet working class marshal in a small, unnamed, frontier town. The new century is approaching, and the world is changing. The business of law is moving from the end of a gun to a more scientific approach. Fingerprints are a big deal in the trade magazines (even if the courts don’t approve), as is reading a crime scene for evidence. But the future is far away when Tully finds his town dark and quiet, his office a shambles—the night deputy beaten and unconscious—and a man swaying, dead, at the end of a rope behind the jail.
The town has a secret. Everyone knows who hanged the man, and why. The woman he killed was Marshal Tully’s sweet young wife. The evidence was clear—he was covered with blood, and in his pockets were a few items from Tully’s house. Open and shut, but Tully doesn’t trust the mob verdict, and when the dead man’s sister came to town crying his innocence she found an unlikely ally.
Lynched is a melancholy crime novel wrapped and delivered as a western. The prose is lean and smooth; something close to hardboiled, but not quite. It is sharp with working class pain and a palpable angst—
There was a cold amusement—an arrogance—in the man’s voice that Tully didn’t like. A superiority. Tully wasn’t educated, rich, or fashionable. He wasn’t particularly intelligent, virtuous, or cunning. When people talked down to him, the way this man did, he secretly felt he deserved it.
It is cast with a litany of scoundrels and saints, and it is often difficult to tell one from the other. There is a wandering con man, cum actor, a self-absorbed, and somewhat delusional, boarding house mother, a beautiful and shy young woman, a saloon and casino keeper, and Tully. And the town, and everyone has their own agenda. The mystery is sharp and plotted with a sure hand. There is more than one red herring, and I didn’t guess the ending until the final pages.
Lynched is a winner. It is entertaining, and, in its small and quiet moments, thought provoking.