Invasion, by Aaron Wolfe—a one-off Dean Koontz pseudonym—is a paperback original published by Laser Books in 1975 as part of its monthly science fiction series edited by Roger Elwood, which is the very edition that caught my eye. Its cool background depicting aliens, a gingerbread house and what looks like a planetary body are captivating. Even the floating head, a regular feature on these Laser Books editions, works for me (especially his hair). The artist: Kelly Freas. 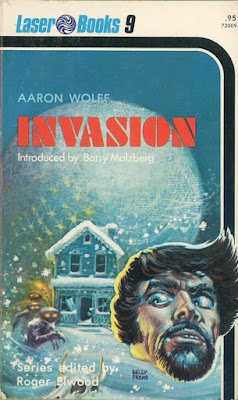 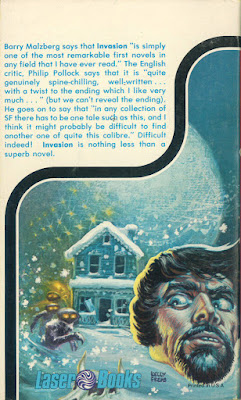 
The three-hundred-acre Timberlake Farm, which we were renting that year, was as isolated a refuge as you could possibly find in New England.
Before Stephen King was outed as the writer behind the Richard Bachman pseudonym there was speculation Invasion was King’s novel. An incorrect conclusion, but interesting anyway. This Laser edition, which is Invasion’s only appearance, includes a brief Introduction from science fiction writer Barry Malzberg.

Invasion was expanded, updated, and reissued as Winter Moon, with Koontz’s name on the cover, in 1994.
Posted by Ben Boulden at 6:00 AM