THE COMMISSION by Michael Norman 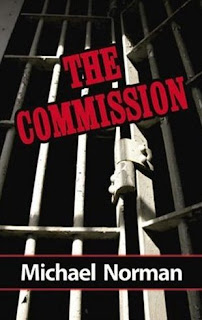 I have never found a mystery novel set in my native Salt Lake City very compelling, and surprisingly there have been a few. The best was Stephen White’s Higher Authority, which I enjoyed and really had some pretty accurate and colorful local scenery. Unfortuantely it is the exception. The others were pretty drab and uninteresting. The worst was a lazy effort by Thomas H. Cook titled Tabernacle. It was written pretty well, but it also showcased Cook’s lack of knowledge about the culture and even the geography of the place. There was also a private eye series that starred the moronically named Moroni Traveler written by Robert Irvine. The scenery and setting were an improvement, but the character and mystery were both lacking.

I have always wondered why mystery writers stay away from Utah. Sure it sounds uninteresting, but under the placid white shirts and black suits, the prim cleanliness and façade of wholesomeness resides the same decay and rot of any culture. Salt Lake City is a major hub of the Mexican drug trade. There is the sinister grip of the Mormon Church on local politics. There is polygamy, murder, rape, and above all else the tendency of financial fraud—Salt Lake City is the smallest American city with its own FBI fraud office. And the politicians are as seedy, corrupt, and nasty as anywhere else. One of our Senators actually employed E. Howard Hunt during the Watergate years.

Needless to say when I learned there is a local writer—Michael Norman—producing a Salt Lake City-based police procedural series I was intrigued. The first novel, of two so far, is titled The Commission. It is a slim volume published by Poisoned Pen Press and amazingly it received a starred review from Publishers Weekly. The cast consists of two cops. The first, and the narrator, is Special Investigations Branch of the Utah Department of Corrections Chief Sam Kinkaid. The second is the stunningly beautiful and always competent Salt Lake City detective Lt. Kate McConnell.

When the son of a local and very powerful businessman is gunned down in the driveway of his home in an exclusive neighborhood Lt Kate McConnell is tapped to lead the investigation. Kincaid is called in because the victim—Levi Vogue—was the Chairman of the Board of Pardons and Parole. It doesn’t take long for the pair to discover Vogue led a less than ideal Mormon lifestyle; he was a philanderer who enjoyed strip clubs and hookers. The two detectives quickly find themselves walking a tight line between an escalating criminal investigation and a deepening political quagmire that threatens not only their careers, but potentially their lives as well.

The Commission is an enjoyable straight-forward procedural. It is written in first person with an occasional, and not too annoying, switch to third person. The setting is well drawn—while Mr Norman doesn’t quite capture the nuances of local life, he does make a good attempt that is more than just throwing out names and places. There are a few scenes in the small Casino border town of Wendover that are particularly well drawn. The cast is broad and the victim and his family are easily compared to a local clan that claims the current Governor as one of its own.

The plot is straight forward and unmarred by any jolting twists. I did guess the conclusion no more than one-third of the way into the novel, but it really didn’t bother me. The narrative is clear and readable and there is enough tension and suspense to keep things interesting.

The Commission is the best mystery novel I have read set in Salt Lake City. It is quick, believable, and very entertaining. It is certainly good enough that I plan to search out the second in the series.
Posted by Ben Boulden at 1:09 PM

Nice, thanks for the great review and tip on this book! Being from SLC, I find this especially interesting. You really captured what it's like here. Salt Lake seems innocent enough, until you get to know it. I'm going to check my library and local bookstores to see if I can find a copy of this.