THE FATE OF KATHERINE CARR by Thomas H. Cook 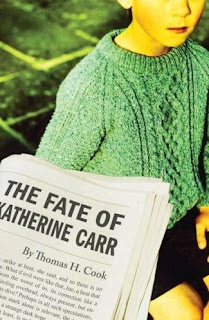 George Gates was a travel writer, but since his young son was murdered he no longer has a taste for the road or the stories he once wrote. Now he works for the local newspaper and writes human-interest stories about local events and personalities.

His life changes when George meets a retired cop at his local pub that worked an unsolved disappearance of a young poet in 1987. The young woman—Katherine Carr—disappeared without a trace, but she left behind a story about a woman being stalked, a story with a main character who shared her name, and very possibly her fate.

The story powerfully resonates with George, and for the first time in years he is interested in something beyond booze and memories. He also meets a young girl with the premature aging disease progeria who seems to have an insight into Katherine’s disappearance as well as an understanding of George and his dead son.

The Fate of Katherine Carr is an uneven novel; at times it feels powerful and strident, while at other moments it feels contrived and forced. The prose is wispy and haunting—

“The story came to me by way of Arlo McBride, a man whose eyes seemed oddly shattered.”

The characters are rich and fully developed, but the story tends to meander from its forward momentum and balances precariously on atmosphere and dread—the dread of loneliness, failure and betrayal. This plodding works well for much of the novel, but in the end it feels too heavy and opaque to be completely successful.