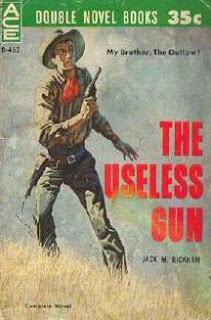 You wouldn’t know it from reading my blog—except for one lone post—but I’m a huge Jack M. Bickham fan. I first discovered his work when I read his fourth Brad Smith novel—Breakfast at Wimbledon—back in the mid-1990s and I have been reading his work ever since. I recently read an ACE Double Western titled The Useless Gun. It was paired with The Long Fuse by John H. Latham, and published in 1960. It is the fourth (of five) Western novels Bickham wrote for ACE, and it’s really pretty good.

Clayton Hartung is young and married. He is partner in a small ranch with his best friend—John Campbell—located just outside the small town of Barkerville, Texas. His life is just coming together after a rough childhood. He was an orphan and there is a hint of violence in his past, but that is all behind him until four hired gunmen come to town. It doesn’t take long for the four strangers to make their presence known: they gun down a Barkerville hardman in the hotel, and quickly thereafter dispatch the Marshal.

The Barkerville locals are scared and they look to Clay to make a stand against the men, which he does, and does alone. His partner has a game leg and the other townspeople have problems of their own. It’s too dangerous and they have families to think of after all. However, Clay is surprised by what he finds in the gang—something personal and unexpected, and the revelation changes everything.

The Useless Gun is the expected: competent action scenes, a tight and linear plot that is more familiar than unfamiliar, and crisp and plentiful dialogue. What elevates it above the ordinary is a narrow vain of emotion Mr Bickham expertly mines throughout the narrative. There is a particularly powerful lynching scene that has a drastic and deep impact on both the protagonist and reader alike. There is also the tragic sense of duty and betrayal that haunts Clay throughout.

The Useless Gun is a terrific example of the old ACE Western line—it is short, to the point, and very exciting. It has the feel of an episode of an old television series, less the bad color and strangely cool backdrops. The major plot twist is given away on the packaging—“My Brother, The Outlaw!”—although it really doesn’t diminish the entertainment value of the story. Mr Bickham’s work is a treasure chest of terrific fiction and this novel is a perfect example.

Really fine post, Ben. Jack was one hell of a good writer, an equally good teacher of writing and one of the nicest, most decent people I've ever known. He wrote a piece in a Mystery Scene of the Eighties (I think) about how close he came to a major outright buy from a big Hwood studio and how the book itself was being widely talked about but the publisher was too small to support it with advertising or heavy discounts to the bookstores. I learned something about my craft from every Bickham novel I read.

Ed mentioned Bickham being a good teacher. Bickham wrote several books on writing that Writers' Digest published in their line of teaching materials.

I thought I was the only one who remembered Jack Bickham.

Back in the 90's, when I was a snotty punk, I turned my nose up at the Wildcat O'Shea series, thinking them to be at a "Hee Haw" level. Then I read one, and was immediately hooked. Those things were huge fun. His writing books were also damned good.

Glad you mentioned him.

Ed. Do you recall the novel of Bickham's that nearly went big time? Probably not, but it is worth a shot.

Also, I've always assumed Bickham's humanity was captured and showcased with the Brad Smith novels, maybe naively, and that Smith was an alter-ego that portrayed many of Bickham's on thoughts on the world. Again, probably naive, but...

Frank. I've read several of Bickham's writing books; Scene and Structure more than once, unfortunately I'm a lost cause.

Pericles. I haven't read any of Bickham's Wildcat O'Shea novels--as by Jeff Clinton, I think--but I do have at least one sitting on a bookshelf. BUILD A BOX FOR WILDCAT.