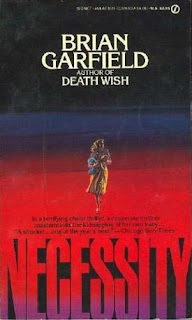 “It’s the sixth day after the theft. She pulls off the Interstate in Tucson, a city she has never seen before. According to the atlas it is a county seat and the second largest city in Arizona—population half a million people.”

Matty LaCasse is a former model and now the wife of a wealthy New York construction magnate. She is the recent mother of a beautiful and healthy baby girl. She is on the run, alone, scared and hell-bent to get her daughter back.

Matty tracks across the American West, a briefcase full of cash with her and a plan; she needs a home away from her pursuers, but to do so she needs to become someone else. An entirely new person that no one from her old life will recognize or even associate with the person she was.

Necessity is an absolute firecracker. It opens with a white hot flash and never lets up—the action is tight and it is expertly used as a tool to ratchet the suspense from vague dread to outright terror. The characters are perfectly molded into dimensional people who are likable, terrifying and, most importantly, believable. The storyline is linear and sharp with enough false leads and psychology—mostly Matty’s—to keep the reader off balance and avidly turning the pages—

—which is all terrific, but Mr Garfield also flavors the story with technical information about creating n

ew identities and, more importantly, erasing an original identity. He creates a world that is real and absorbing without slowing the story with too much detail and information.

The narrative is smooth and inviting. It is told in a matter-of-fact fashion, and with the seldom-used present tense—“She lets herself in and double-locks the door and slumps into the threadbare easy chair. Strength flows away as if a drainplug has been pulled.”

Necessity is an example of what a thriller should be--quick, hard, intense, and thrilling. It is a story that was published twenty-five years ago, but it still has a freshness and originality that makes it compelling and entertaining reading. In short, it is a novel that should not only be read, but that should be savored.

Always loved the author's work, in fact recently just finished "Recoil." I hear he is back writing Westerns again. I use to devour his early Western novels. What a talent.

RECOIL is yet another Garfield title I haven't read. I have read several of his Westerns and enjoyed each of them. I have heard, although I haven't read it, that SLIPHAMMER is a must read for every Western reader. I have it stowed in a box somewhere.

I also have several of his ACE Double westerns published as by Brian Wynne. Man, I have way too much to read. Of course that might be a good thing.

I hope your news is accurate. I would love to see some Brian Garfield back in bookstores.

Necessity is one of the many excellent Brian Garfield novels that should be brought back into print. Stephen King has mentioned how much he likes the Garfield westerns. I've read all them except a house name book he wrote. Sliphammer is probably the best but Gundown is close behind. As John Ives he wrote one of the grittiest westerns I've ever read, Fear In A Handful of Dust. My favorite Garfield novel is What of Terry Conniston? I mentioned this to Brian one day and he said it was too grim to be really successful. There are no good guys in it, just guys who are varying degrees of bad. This was written in the early seventies and includes a fascinating take on the dark side of hippiedom, the crime side. He's one of my favorite writers.

Wow, I remember "Gun Down." It was a gritty Western for its day. Believe it was loosely used in making the Heston/Coburn film "The Last of the Hard Men." I thought Garfield may have "beefed up" the story in 1976 and released it in paperback again under the title "Last of the Hard Men." (But I may be wrong about that)