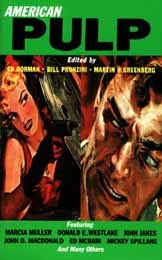 I recently read a short story by the late Stephen Marlowe titled “Terrorists”. It was published in the January 1956 issue of Accused; I read it in the 1997 anthology American Pulp. It is a hardboiled private eye story—

—Chester Drum is a Washington D.C. private detective, and on a late and warm August night as he walks past his office he notices a light inside. He makes a routine check with the elevator operator who tells him the cleaning staff should be done. Drum then takes the elevator to his floor and quietly approaches his office; inside he finds a cleaning woman with a very cold war tale.

Her son is involved with a Puerto Rican youth group and they plan to assassinate the Secretary of State. The group is concerned with an independent Puerto Rico, but the mother tells Drum the boys are being used by a socialite Red—a communist—who cares nothing for Puerto Rico or the youth group, but is using them to further her own cause; the embarrassment of the United States and the advancement of Soviet-style communism—

—The story is swift and, as expected from Marlowe, exciting. The plotline is sleek and straight and there really aren’t any surprises to a twenty-first century reader. That doesn’t mean it isn’t a good story, because it is a terrific story, but rather it means it is a story of its time. A small capsule filled with the popular fear and turmoil of the 1950s.

The plot can easily be traced to two events that occurred in 1950. The era of extreme paranoia brought on by McCarthy with his wild accusations of communist spies everywhere, and the failed assassination attempt on President Truman by three Puerto Rican terrorists.

I make this point not to weaken “Terrorists,” but rather to make the point that fiction, including popular fiction, is a mirror of the culture that creates it. Go into any used bookstore or library and take a novel from the shelf and you will find a nugget of truth about the time and place it was written; not the whole truth, but rather an image that represents the truth and atmosphere of the era—the fiction of the 1950s was saturated with communism and paranoia, just as the fiction of the 1980s was ripe with greed, drugs and Vietnam.

“Terrorists” is a brilliant example of both entertainment and place. When it is read it grabs the reader by the ear and jerks him into a past that only exists in memory and archive; it is a capsule that helps the reader understand from where he came and, hopefully, where he can go or, at least, avoid returning. It also allows the reader to understand how little civilization has changed over the past fifty; the enemies have changed (maybe), but the fear is very much alive.

And it does it all in a brilliantly entertaining fashion. Can it get any better? Maybe it can, because Chester Drum can be found plying his trade in no less than 20 novels.
Posted by Ben Boulden at 7:42 AM

One of my early stories was reprinted in that book. Was originally published in Mystery Monthly back in'74. WOW.

Bob. It's really a terrific anthology. I haven't read all the stories yet; I read a story every few days.

It has stories from Mickey Spillane, John D, Don Westlake, Lawrence Block, David Goodis, James Reasoner, Richard Prather, and even one by Richard Matheson. And the names I didn't include are just as impressive.

I recommend it completely. I'll let you know when I read your story, "Cop Without a Shield".