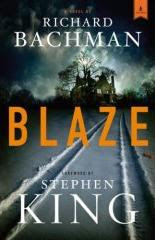 Stephen King has a new novel just out called Blaze. It is published under his pseudonym Richard Bachman, and like the first three novels he published under the Bachman moniker, it was written before his first novel Carrie was published. In his frank and enlightening Introduction King makes it clear that Blaze is a trunk novel. He says, “It’s a revised and updated trunk novel, but that doesn’t change the basic fact.”

Blaze is the story of Clayton "Blaze" Blaisdell, Jr. He is a giant of a man—6’7” and approaching 300 pounds. He is slow of thought, a criminal, and alone. The novel opens with Blaze stealing a car—his partner, George, leaves him to hotwire an old pickup by himself. Blaze isn’t too bright, and he gets angry and scared. Fortunately he finds a key hidden under the floor mat, and in a huff he decides to leave George in the bar and go home. That’s when Blaze remembers George is dead.

The trouble is, Blaze forgets George is gone a lot, because he still hears him speak sometimes, but always from another room, talking through the door, giving Blaze advice about this and that: how to steal a car; rob a convenience store; and plan the big one. The one job that will get him out of the life and transport him to someplace warmer and safer than Maine. George planned that final job—the kidnapping of the infant child of a local wealthy family—before he died in a knife fight. And now Blaze decides he wants to do it. He’ll do it alone, but he’ll have George their to talk him through it.

I can’t say enough good things about Blaze. It is an old style novel. The voice is crystal clear and the theme is very much like an old noir. The protagonist, Blaze, is a good man who has never gotten an even break. He has never been at the right place at the right time, or any other cliché you can think of. He is likable, chummy and in his own way one hell of a good person. His father beat the intelligence out of him and the unfairness of life took everything else. Blaze is a novel about love, need and just plain bad luck.

As for the trunk novel thing, my only thought: Damn if I don’t wish I had a novel this good hidden away in a dark, lonesome trunk.
Posted by Ben Boulden at 7:53 AM