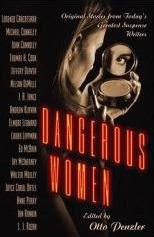 “Born Bad” is a cleverly plotted short story written by Jeffery Deaver. It is a simple yet powerful story that uses repetition—in one case the clatta, clatta, clatta of an operating sewing machine, and in another the mindless ebb and flow of an old fairy tale—to slowly build and maintain tension. And it works, very well.

“Born Bad” is the story of Liz Polemus, an aging woman who is nervously awaiting the return of her prodigal daughter—her daughter, Beth Anne, is a disappointment. She refused the love and affection of her parents, chose the wrong crowd in high school and then abruptly left home when she could. Now on a chilly and rainy Oregon night Liz is awaiting Beth Anne’s return. She doesn’t know what to expect—she feels fear, trepidation, and even guilt at what she did wrong as a parent. But still she waits.

This is the first story written by Jeffery Deaver I have read, and I was more than impressed. The plotting was nifty—he turned the story on its head in one paragraph without confusing or annoying me. The atmosphere was vivid: I could hear the rain pelting against the roof and windows, feel the damp night, and see Liz sewing and humming the old fairy-tale as she waited. The prose was light, swift and very readable. In short, “Born Bad” was very, very good, and it certainly won’t be the last Jeffery Deaver story I read.

“Born Bad” was originally published in the anthology Dangerous Women, edited by Otto Penzler, in 2005. It can also be found in The Deadly Bride and 21 of the Year’s Finest Mystery Stories, edited by Ed Gorman and Martin H. Greenberg.
Posted by Ben Boulden at 10:04 AM