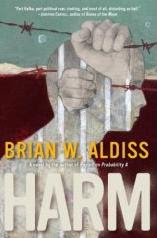 My latest review for SFReader is live and online. This month I reviewed Brian W. Aldiss’s latest novel HARM.

HARM—an acronym for Hostile Activities Research Ministry—is a satirical novel based in the near future. It is the story of Paul Ali, a writer and British citizen of Islamic heritage, who is being held as a political prisoner in a terrorist detention camp. Inside the prison he is known only as Prisoner B. His crime: a few characters in his comic novel "The Pied Piper of Hament," drunkenly joke about the assassination of the British Prime Minister. His only human contact is with his interrogators, who practice torture and violence with a particularly frightening glee.

HARM is a thought provoking science fiction novel that examines the surge of government sponsored fear and violence since September 11, 2001, and no matter your political views, it is a novel that will expand your perspective on war, hate, and fear.

To read the review click Here.
Posted by Ben Boulden at 9:30 AM