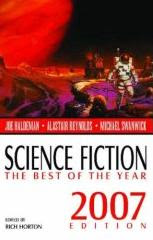 There is a mystery brewing in my office: I have an anthology—Science Fiction: The Best of the Year, 2007 Edition edited by Rich Horton—and on the cover there are three names (all of them belong to significant writers in the genre) and not one of them has a story in the anthology. The names: Joe Haldeman, Alastair Reynolds, and Michael Swanwick.

Unless I’m missing something—which very well could be the case—this seems like devious marketing. These are authors who sell well, have a strong fan base, and could very well be the deciding factor between purchasing the book or not. And unless you go over the table of contents you would never know they are not represented in the anthology.

Fortunately the works represented in this anthology really are pretty great, even if there isn’t a Joe Haldeman story in the bunch. I haven’t read every story, but the few I have, have been well written, interesting and thought provoking. But still, what is the deal with the Haldeman, Reynolds, and Swanwick names on the cover?

UPDATE: If you haven't clicked on the comments link for this post, do so because the editor, Rich Horton, has explained what happened with the cover design. It was a mix-up, and the contributors from last year ended up on the cover this year. I knew there had to be an explanation.
Posted by Ben Boulden at 6:10 PM

Hi, I am Rich Horton, the editor of the anthology.

We are very sorry about the cover mixup. What happened is that flats were printed up as a test before the stories were selected, so the same three authors featured on last year's book were temporarily put on the cover. The art director was supposed to change the cover text as soon as the final selections were made, and the change did happen for the Trade Paperback editions, but for some reason was missed for the Mass Market paperbacks.

There was no intention of devious marketing, but I can see that it might look that way. I am very sorry about this.

I am happy you are enjoying the book by the way.

Wow. I bet that caused some angst; not to mention a few coarse words. To be honest I didn't notice the error until I was about halfway through the anthology and it dawned on me that I hadn't read any of the authors on cover yet.

But it really is a terrific anthology. I enjoy the "best of" anthologies because they tend to be less uneven than a normal anthology.

Thanks for the comment Mr. Horton, and for explaining what happened.